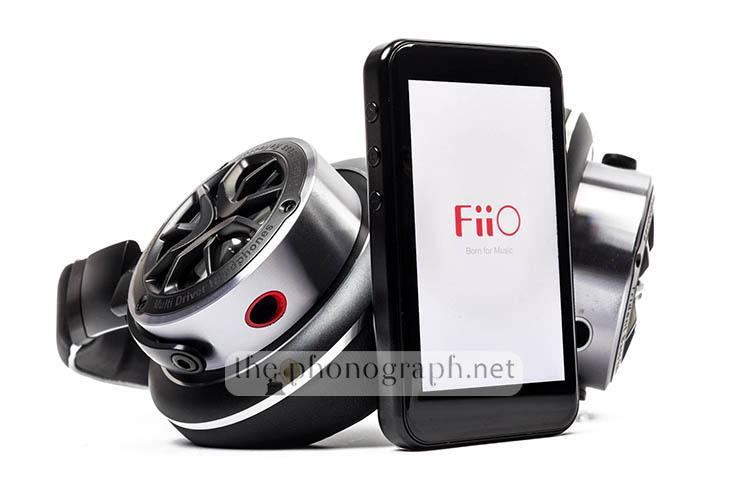 The FiiO M6 holds an Exynos 7270 CPU, an ES9018Q2C DAC, native DSD128 and it supports wireless WiFi and Bluetooth connection – the operating system of the FiiO M6 is a customized version of Android.

This year FiiO has been shaking the budget-conscious, audio enthusiast and audiophile market, the FiiO M6 joins these new products releases next to the:

You can buy the FiiO M6 in:

The FiiO M6 features include advanced options such as:

The FiiO M6 unboxing results in a TPU clear cover (similar to the one of the FiiO M9 but with a less accentuated dots pattern), 2x screen protectors (one is already placed on the screen and on the back cover) and a charging USB Type-C cable that is also used as the cable for it’s USB DAC functionality.

The DAP/DAC comes inside a relatively small package with a clean design – packaging style similar to most latest devices from FiiO, like the FiiO M3K, FiiO BTR3 and FiiO K3.

has a gracious small design with an unibody build and round edges that makes it look like a mini-me smartphone.

On the upper right bezel there is a tiny RGB light that indicates the status of the device.

The FiiO M6 has four buttons and a multi-touch screen (5 finger sensitive) that allows the full operation of the device.

The buttons are placed on the left edge and on the top edge. The top edge has a single button that turns on/off the device and the screen, the 3 remaining buttons on the left edge control the play/pause function, volume +, volume – and skipping tracks.

On the FiiO M6 you won’t find the volume scroll wheel that the FiiO M9 has, but each click of the volume + or volume – buttons provides the exact same precision of control as the M9’s wheel- and it has the same 120 volume steps.

The 3 side physical buttons can, also, fully control the music playing while the screen is turned off, allowing to: play, pause, increase volume, decrease down, skip to next songs, go back to previous song. The operation with the screen off of any and/or all the side buttons can be disabled through the “Key-lock” settings.

The FiiO M6 is a very easy device to control and use, while the touch screen has the same intuitive gestures as many Android smartphones.

has a 1200mAh rechargeable battery that can provide 15 hours of continuous music playback time while being used in Bluetooth mode and up to 13 hours using a wired headphone.

According to the brand, the standby time of the FiiO M6 is over 26 days.

How to charge the FiiO M6:

The FiiO M6 is charged through it’s USB Type-C connection (with the included cable) connected to a power adapter that outputs 5V and 2A.

Despite the tiny size, the FiiO M6 is a very rugged device with 2.5D glass and an CNC aluminum alloy main body with narrow bezels.

The FiiO design team has done a very good job with the intersecting section of the glass to the metal body with, nearly, unnoticeable seams or bumps.

The IPS technology used for the screen of the FiiO M6 provides full viewing angles with no color shift nor distortion.

The brightness of the screen can be manually set with the same Android brightness slider that can be found on any modern Android smartphone.

Being an Android-based device, the FiiO M6 has the same sliding top menu as any Android smartphones but that has been customized to give quick access links to: Settings, Brightness slider, WiFi, Bluetooth, Line out mode (LO, PO), USB mode (DAC, storage), Filter settings, AirPlay.

The FiiO Music App, bundled with the FiiO M6 (firmware version v 1.0.0) is the version 1.0.7 which enables FiiO Link to control the music player from your smartphone – it is needed to use the FiiO Music app on both devices.

The FiiO M6 holds a single ESS Sabre 9018Q2C chip that combines DAC and amp capabilities – this is the exact same DAC/Amp chip that the FiiO M7 has.

By being armed with the same M7’s chip, the M6 also has similar decoding capabilities, being able to decode files such as:

Differently to the FiiO M9, the FiiO M6 has their connections distributed on the top and bottom edge of the device.

The top edge holds the 3.5mm headphone jack (on the left corner) and the bottom edge has the USB Type-C connector centered.

), the FiiO M6 presented a clean and clear sound with little to no coloration.

During our soundtests, the FiiO M6 revealed to be a neutral sounding music player that was able to reproduce each frequency range as it is meant to be.

Furthermore, we measured it’s frequency response, which resulted in a remarkably flat curve.

As the unit also oofers Bluetooth connectivity and USB DAC functionality, we proceeded to test it out in these 2 modes.

The results of the FiiO M6 soundtests, in Bluetooth and DAC mode, demonstrated that the device is still able to preserve the same impeccable response as in wired mode, with no coloration and only a rolled-off response on frequencies near 20.000Hz while being used in Bluetooth mode (not in DAC mode), which did not affect significantly the sound quality of the music player.

Being that the device provides 9 EQ presets we proceeded to measure their efficiency and response. The results showed that the FiiO Music app EQs reflect the real band’s +dB and -dB applied on each EQ preset with accurate precision.

Part of the M6 sound capabilities to highlight include a wide frequency response range of 10Hz to 85000Hz, a recommended headphone impedance of 16 to 100 ohm, measured signal to noise ≥118dB , noise floor <3uV and a power output of 110mW (16 ohm)

The strong output at 16 ohm and 32 ohm allowed the FiiO M6 to drive nearly any in-ear and over-ear headphone with these impedance range without any issues and providing as much power as needed. Moreover, this tiny music player was able to drive full sized headphones with higher impedance with a very respectable performance and output volume.

The EQ of the FiiO M6 can be manually set or can be selected among predefined presets (Pop, Rock, Dance, Blues, Metal, Vocal, Classical, Jazz)

Audio files can be stored in the internal 2GB (remaining free space) or in an external microSD card; to access and play these files you need to use the FiiO Music App.

Songs can be accessed and sorted by:

Additional apps can be installed besides the already bundled but only apps that are whitelisted by FiiO are installable, as of firmware v 1.0.0 the apps that can be installed are: Spotify, Qobuz, Roon, Deezer, QQ Music, Xiami Music, JOOX, ES file manager, Himalay.

How to install apps on the FiiO M9:

To install third-party apps on the FiiO M6 it is needed to copy the apk of the app to a microSD card and install it from the “File Management” of the FiiO M6.

The firmware of the FiiO M6 can be upgraded through it’s micro SD card or via OTA upgrades from the device itself while connected to a WiFi network.

To update the firmware is needed to insert a microSD card, even if the update is done OTA.

At the time of the publication of our FiiO M6 review, the firmware version available is v1.0.0

✅ Same screen size as the FiiO M9 and FiiO M7 but with a way smaller, overall, device size

✅ As tall as the FiiO M3K and nearly as thin

✅ Expandable storage up to 2TB

✅ Cheaper price than the FiiO M7

❌ Not a huge amount of accessories included (yet, more than fair for the price)

The FiiO M6 is a huge update from the FiiO M7 and, certainly we would rate it above the FiiO M7 meriting to be called FiiO M8 instead of M6, due to it's very similar upgraded specs as the FiiO M9 but with a much smaller form factor and substantially more affordable price.

If these 12 huge upgrades are not convincing enough to choose the FiiO M6 vs FiiO M7... the price of the M6 is cheaper than the M7!