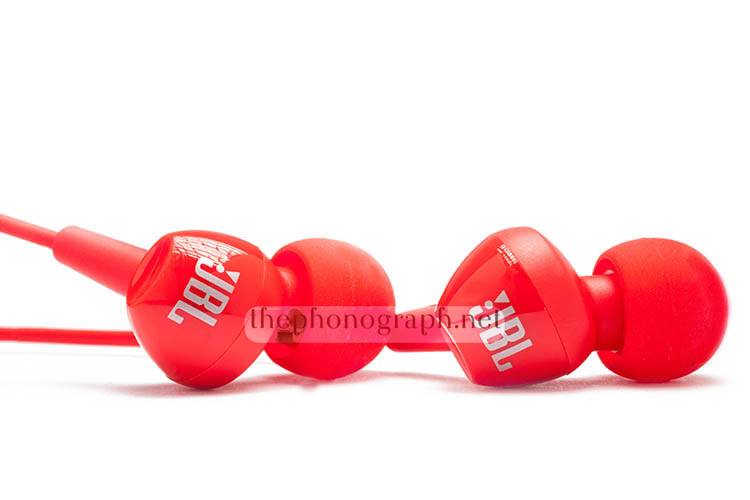 is one of the most budget friendly JBL earphones that you can get in the market. JBL is among the biggest brands of audio equipment including earphones and speakers.

We decided to review the JBL C100SI

after the very pleasing experience that we had while reviewing the JBL T110 which was able to obtain a place in our Best Earphones for Sports chart. The JBL C100SI are tiny and super light with plastic housings. Comparing the JBL C100SI

vs JBL T110 both have very similar size but are not equally shaped; the C100SI is roundier than the T110 and also the C100SI is a bit lighter.

The construction quality of the JBL C100SI is good but the JBL T110 feels more substantially constructed. The JBL C100SI

has round cables with a rubberized material that aids combating tangling issues and a 1-button inline control/microphone to play/pause, skip tracks and/or answer/reject calls.

in any of the classic earphones colors: white, black or red.

The JBL C100SI come packed in a JBL styled designed box, inside there are a 2 extra eartips.

The JBL C100SI have punchy bass with good energy and depth while still do not sound boomy.

The bass of the JBL C100SI vs JBL T110 has slightly less punch and sub-bass but not there is not a radical level of difference between them. Despite the less bassy profile, the JBL C100SI still have more than enough bass for any type of music.

An EQ makes the C100SI much more punchy and with noticeably deeper sub-bass.

maximum amplification power (high gain, bass boost on and custom basshead eq applied) and resulted in a massive increment of mid-bass punch and sub-bass depth. The enhancement was so pronounced that they were even able to achieve basshead level impact and rumble above the KZ ATE

and noticeably stronger than the JBL T110 but only if pushed to the very extreme. Although the JBL C100SI were able to provide a respectable basshead impact and rumble do not expect to achieve the level of the KZ ZST, KZ ZS2, Xiaomi Mi Pro Hybrid, Sony MDR-7550, Sony MDR-XB50AP, Pioneer SE-CX8, Senfer 4in1, Puma Bulldogs, Plextone X41M, Plextone X50M or to be able to obtain a place in our Best Basshead Earphones Chart. Comparing the JBL T110 vs JBL C100SI amplification handling power capacity, the JBL C100SI were able to handle an extra 5% of more power than the JBL T110.

Mids of the JBL C100SI are not harsh at all, warm and laid back on the lower mids section due to mid-bass bleed. Comparing the JBL C100SI vs JBL T110, the JBL T110 are slightly less recessed. An EQ made the C100SI’s lower mids much clearer and still remaining free of harshness and boxiness.

Highs are bright enough with also some detail; piercing and sibilance is not an issue with the JBL C100SI. Comparing the JBL T110 vs JBL C100SI

The sound that leaks out of these earphones is higher than average and about the same of the JBL T110. With moderate to high audio volume, sound will be heard by nearby people.

The JBL C100SI vs JBL T110 regarding sound isolation are very similar, both providing a fair amount of isolation despite the tiny housings but with the JBL C100SI being able to provide a tiny bit better performance.

The JBL C100SI are outstandingly comfortable with their super light and tiny housings (similar size to the SOUL K-POP, Sennheiser CX200

and JBL T110) Fit is tight and secure and will withstand any normal activities without falling out.

The response to equalization of the JBL C100SI was excellent, providing very noticeable improvement of every audio frequency without introducing much problems. Bass became highly energetic punchy and deep; mids became noticeably less recessed and still not harsh; highs obtained some extra brightness but mostly a great amount of additional detail despite the sibilance introduced.

The JBL C100SI, despite being the smaller and usually cheaper brother of the JBL T110, were able to provide a respectable level of sound quality which even surpassed the highs quality of the T110.
With a tiny size, superb comfort and very light overall weight the JBL C100SI can be safely recommended to anybody looking for a prime earphones brand at a price of an ultra budget chinese earphone that is still able to provide good sound quality (besides mids)