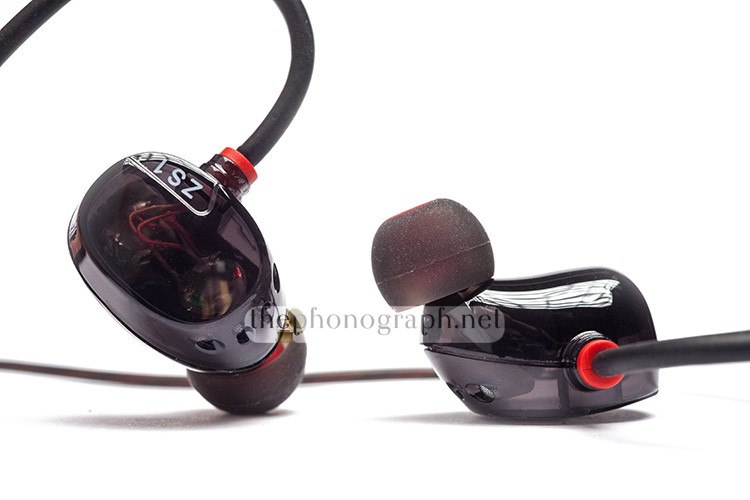 We have already reviewed newer KZ earphones like the KZ ZS5, KZ ZST, KZ ZS3 and KZ ZS2 but we thought it was time to add a space for the KZ ZS1 in our KZ earphones review database.

The KZ ZS1 is a double dynamic driver earphone, like the KZ ZS2, one of drivers is an 8 mm in diameter while the smaller one is 6.8 mm but each one is responsible of reproducing different audio frequencies, the 8mm DD takes care of lower frequencies while the other one is dedicated to the rest of the audio frequencies. By doing this each dynamic driver can specialize and perform better, supposedly providing better audio quality.

The KZ ZS1 vs KZ ZS2 show very similar features. First of all, it can be found the same double dynamic driver configuration and driver size, then the housings designs which are ovaled and curvy with a translucent plastic material which allows the inner parts to be seen, the difference here between the KZ ZS1 vs KZ ZS2 is that the KZ ZS1 has a black only housing color while the KZ ZS2 has a blue colored housing. Both share the same style of use and fit which is like custom and sport earphones with the cable going up and around the ears; this fit sometimes offers better comfort and substantial stronger fit.

which is nicely rubberized helping combat most tangling issues and pretty toughly built. The plug is L-shaped which some people really appreciate.

You can buy the KZ ZS1

only in translucent black but you can choose a version with an inline mic and 1-button control or without it, usually the mic/control version costs a tiny bit more so if you are in a really tight budget you can opt for the mic-less version and save a bit on the price.

The packaging of the KZ ZS1 is the classic first generation KZ’s small dark cardboard; inside the box there are 3 pairs of eartips.

The KZ ZS1’s 8mm dynamic driver offers deep sub-bass and punchy mid-bass right out of the box with no need of applying an EQ to feed up it’s bass response. Bass is fun and very energetic with an absolute capability of fulfilling anyone’s bass needs, it is also worth saying that the strong bass presence of the KZ ZS1 can sound boomy many times too. Overall, the bass of the KZ ZS1 vs KZ ZS2 is similar between both but the KZ ZS1’s bass is a bit stronger and boomier. It is important to make an extra effort to fit the housings as deep and tight as possible to allow them to achieve these bass levels, any misplacing will highly reduce their bass capacity.

After an EQ, bass gets much deeper and punchier but to be true there is no real reason why you should overpower the already enhanced bass that they offer.

Putting the KZ ZS1 under our extreme amplification test, using a custom basshead EQ and amplifying with a Fiio E12

set to high gain and bass boost turned on; they were capable of handling 48% of the Fiio E12’s maximum power. The result of the test was an exponential increase of mid-bass and sub-bass with a very respectable basshead impact and rumble on level with the Xiaomi Mi Quantie Pro Hybrid but less hard-hitting than the newer brother, the KZ ZS2.  Despite gaining a position on the Best Basshead Earphones Chart do not expect an in-ear shake experience similar to the KZ ZST, Sony MDR-XB50AP, Plextone X41M, Pioneer SE-CX8, Puma Bulldogs, Senfer 4in1, Plextone X50M or the Sony MDR-EX800ST.

Mids of the KZ ZS1

are very warm and very recessed by the strong mid-bass bleed that they have. Higher mids are rolled off and never harsh while lower mids and lower vocals sound excessively laid back and distant. Trying to apply an EQ, there is a slight clearing up of their mids but not a great improvement and a small hint of harshness it is introduced.

Highs exhibit dark sound, almost no detail and no piercing nor sibiliant peaks. Overall their highs are very recessed but it could be said that still their highs are slightly more detailed, less piercing and better than the KZ ZS2. An EQ, provides a bit less dark response and a significant amount of detail, sibilant and piercing highs still do not show up.

The KZ ZS1 have good sound leaking performance, meaning that the sound levels leaking out of them is fairly controlled and reduced not to the level of not being heard by nearby people but enough to have the capacity of blending with environmental noises in normal situations.

The KZ ZS1 sound isolation is excellent, the custom-like shape and big housing help here. They are able to isolate from surrounding noises very effectively without the need of setting high volume levels, even with low to moderate volume they will provide a substantial reduction of noises.

Sharing the exact same shape, size and style of the KZ ZS2, the KZ ZS1 also offer the exact same level of comfort which is pretty good; it is fair to point that the big housings and not too long nozzles may require a bit more of effort to fit them deep and secure enough. When you achieve the correct fit they can provide hours long listening sessions without much comfort concerns.

While applying custom EQs, the KZ ZS1 was able to respond very well in lower frequencies providing a very noticeable increment of punch and depth. Mid frequencies had little to no response while higher frequencies became clearly more detailed but not too much brightness was added.

The KZ ZS1 are good looking custom-like earphones with their translucent housings and offer 2 dynamic drivers for a very low price. Their bass will be able to cover any bass needs but mids and highs fall way behind and may not be enough for most listeners; for these reasons the KZ ZS1 can be only recommended to bassheads or bass lovers that do not care much about mids and highs. Bassheads with good EQ and amplifying skills can get a respectable basshead iem for cheap.