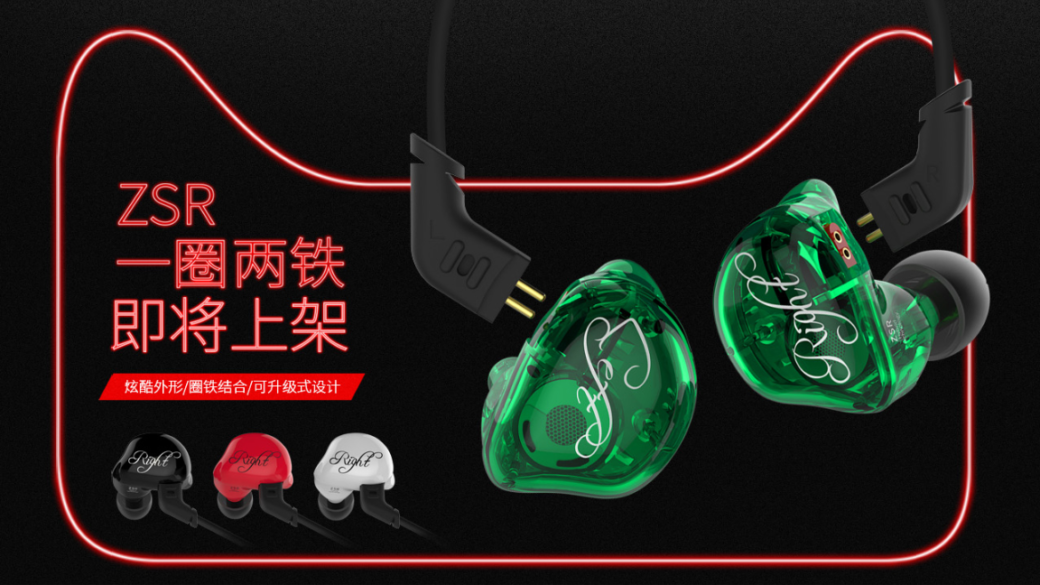 ℹ️ The KZ ZSR has been officially announced. The KZ ZSR had been said to be launched this year but not much details about their possible specs could be found besides some rumors that they would be a 10 driver IEM.

UPDATE: the KZ ZSR is now available to purchase.

You can buy the KZ ZSR green version by clicking HERE

or the KZ ZSR black version by clicking HERE.

KZ has been so active in the last year that it is quite difficult to catch up with their pace.

In the last months they have launched the following:

RECOMMENDED FOR YOU: KZ ZS6 vs KZ ZS5 Comparison

Despite the official announcement, the KZ ZSR specifications are still not fully released but it seems that it will be a 2 balanced armature hybrid earphone (from the translations).

(meaning, 1 balanced armature + 1 dynamic driver per side), as KZ likes to sum up the total number of drivers in their models, for example they call the KZ ZS6

The KZ ZSR will be sold in translucent green or in black, white or red color and will have detachable cables with the same angled connector style as the KZ ES3, KZ ZST

The KZ ZSR apparently will have a retail price inline with the KZ ZS5, so feel safe that still the KZ ZS5 and KZ ZS6 are still an incredible bang for buck.

UPDATE: the KZ ZSR is now available to purchase.

You can buy the KZ ZSR green version by clicking HERE

or the KZ ZSR black version by clicking HERE.

UPDATE 2: We have published the review of the KZ ZSR.

As of now this is the all the information available about the KZ ZSR, in the meantime you can read our comparison of both quad driver top of the line models from Knowledge Zenith at:

Update on specs: The full technical specifications of the KZ ZSR have been published, check them out at : KZ ZSR Specs

Right now there are some high discount deals available for the KZ ZS6, KZ ZS5 and KZ ES3 you can get your Discount Deal by clicking on the green button.