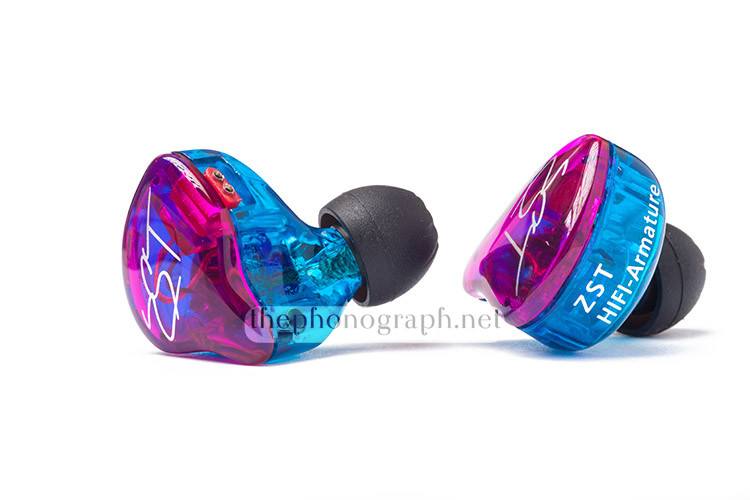 is the 2nd version of the KZ ZST

; KZ launched the KZ ZST PRO after a mediumly brief period of introducing the KZ ZST in the market. The naming of the newer version was controversial from the very beginning with some sellers calling it KZ ZST Colorful while some others name it KZ ZST PRO, this naming ambiguity has generated a lot of confusion and has never been clear if they are the exact same model with a new color option or a newer 2nd generation of the KZ ZST.

Being that all this myth and confusion has been created around the KZ ZST PRO / Colorful and the KZ ZST, we have decided to get ourselves a KZ ZST PRO unit and put it through our tests. As we already own a KZ ZST and have reviewed it in the past we can effectively compare the KZ ZST vs KZ ZST PRO in real time and not by memory, consequently being able to verify or debunk the myths and confusion. Let’s start by introducing some information about the KZ ZST PRO / KZ ZST Colorful

The KZ ZST PRO / KZ ZST Colorful is an hybrid earphone, which means that inside of them you will find a balanced armature and a dynamic driver…

and the recently launched KZ ZS5

. All these newer KZ earphones are designed in a custom IEM style, have detachable cables and are intended to be used with the cables going above and around the ears, like many sport earphones do.

Looking at the KZ ZST PRO

it is seen that housings are shaped identically while all 3 models have a different color design. The main difference with the KZ ZST PRO vs KZ ED12 is that the ED12 is a single dynamic driver earphone while the KZ ZST PRO is an hybrid earphone.

The KZ ZST PRO / KZ ZST Colorful are beautifully designed and offer premium features like detachable cables, solid construction and an hybrid configuration for an extremely affordable price, in fact, if you would search for a similarly featured earphone but from a mainstream classic brand you would pay 50 to 100 times the price of the KZ ZST PRO / KZ ZST Colorful, which makes them an extraordinary deal.

Construction materials chosen for the housings of the KZ ZST PRO are plastics but by any means a cheap fragile one, the material feels sturdy, durable and thick, also the plastics are translucent which allows you to easily see the inner components of the earphone. The cables have a nice looking copperish color and a very rubberized finish that is pretty effective against tangling issues; the cable has the same material of the KZ ZST

, KZ ED12 and many classic KZ earphones like the KZ ATE

. As we mentioned before, the cables are detachable which offers the handy possibility to replace them in case of breakage or if you prefer a different type of cable; the connector used on the KZ ZST PRO / KZ ZST Colorful is a bi-pin connection which is the exact same one found in the KZ ED12

You can buy the KZ ZST PRO / KZ ZST Colorful

You can buy the KZ ZST PRO / KZ ZST Colorful

with an inline microphone and 1-button control detachable cable or without it, in general the option without the microphone costs a tiny bit less; regarding color you can buy it in the blue/purplish color option that you can see on the photos.

RECOMMENDED FOR YOU: KZ ZS6 vs KZ ZST PRO Comparison

The package of the KZ ZST PRO

is the exact same of the KZ ED12

; a small black box with a plastic front, inside there are 3 eartips and the detachable bi-pin cable.

The KZ ZST PRO / KZ ZST Colorful have good mid-bass punch and enough sub-bass depth but there is noticeably more punch than depth, do not expect a basshead or super bass heavy sounding earphones from the KZ ZST PRO but neither an anemic bass, the right amount to cover any music genres.

Using an EQ, the KZ ZST PRO obtained a very strong enhancement of mid-bass and also of their sub-bass depth.

Comparing the KZ ZST vs KZ ZST PRO; the KZ ZST PRO shows a lighter bass sounding style than the KZ ZST which is a much more bass centered earphone with a clearly way way stronger punch and profound sub-bass. The perceptual difference in bass between them is not subtle, instead they are miles away one from the other one regarding their mid-bass and sub-bass sensation (the much darker highs of the “non-pro” could give the impression of bassier sound).

set to high gain and with it’s bass boost turned on; the KZ ZST PRO were able to handle up to a 42% of the Fiio’s maximum power after which they started to heavily distort in the mid-bass section. The results were an outstanding empowering of their mid-bass and sub-bass with a very worthy basshead impact and rumble which was way strong than the KZ ATE

and inline with the KZ ZS2

. Therefore, earning a place in the Best Basshead Earphones Chart where you can also found the marvelous Sony MDR-7550 / Sony MDR-EX800ST

and the out of this world Pioneer SE-CX8

. In this matter the KZ ZST PRO vs KZ ZST

still differed, the KZ ZST PRO could not reach the 50% maximum power handling capacity of the KZ ZST and neither reached their level of impact and rumble. We always point out this; do not try to follow the amplifying examples that we apply during our testings, the risk of damaging and/or permanently breaking your earphone is highly probable to happen and it is irreparable.

Disclaimer
We find important to note that sometimes manufacturers do modifications to their earphones models but still sell them under the same model name.

These modifications sometimes are minor and do not affect the performance of the earphones but sometimes the changes compromise their sound and could lead to noticeable audio differences between the different versions.

Our KZ ZST (non-pro) sample is an unit from the very early release back in 2016.

Mids of the KZ ZST PRO / KZ ZST Colorful are warm with a slight recession of their lower vocals but certainly not excessive as to make them sound distant or muffled. In fact, their lower mids and vocals sound quite good with good presence and energy and are not stepped over by mid-bass bleeding. Higher mids are clear and present too and can reach mildly harshy peaks at some occasions but to be sincere they are not terrible nor extremely frequent and only show up with very high pitch mid notes. With an EQ, lower mids and lower vocals sound much clearer and open with a clear removal of every trace of recession. Higher mids become harsh so it is better to not feed up higher mids frequencies with an EQ.

Comparing the mids of the KZ ZST PRO vs KZ ZST; the KZ ZST PRO again shows a different sound signature with clear mids and less forward higher mids than the KZ ZST which have a strong level of bass bleed and much more harsh sounding higher mids.

Highs of the KZ ZST PRO have some detail but most of all are noticeably bright. Some sibilance is present but in a tolerable degree, with strong peaks there can be piercing highs too. With an EQ, a substantial level of brightness is added and they become capable of resolving a welcomed extra quantity of detail. On the other hand, piercing highs and sibilance become much stronger and frequent.

sound as absolute antonyms, the KZ ZST PRO have bright highs with some hearable detail and exhibit some sibilance…

Sound leaking out of the KZ ZST PRO / KZ ZST Colorful is similar to many average earphones, sound will be heard by nearby people in quiet situations but will blend with environmental sound in normally noisy place. If you are searching for the best one for libraries, check the KZ ATE.

The KZ ZST PRO has the exact same sound isolation performance of the KZ ZST; a very effective and noticeable level of reduction of perceived outside noises.

Sharing the exact same shape and form of the KZ ZST and the KZ ED12, the KZ ZST PRO are able to provide outstanding fit and comfort. The KZ ZST PRO can be used for very long listening sessions without having to worry about fatiguing the ears or generating any type of pain. Moreover, they offer a secure fit that can hold their place with no risk of falling out.

The KZ ZST PRO respond noticeably to equalization, they were able to add a high level of high frequency extra brightness and a good amount of detail; mids removed any signs of recession on the lower end while higher mids became harsh; bass and sub-bass frequencies gained a substantial amount of punch and depth.

Because of all the aforementioned reasons the KZ ZST PRO are easy to be safely recommended to anybody looking for an outstanding earphone with premium features (detachable cables, hybrid configuration, etc.) and that at the same time sells for just a couple of bucks and looks great.

Photos
Go to top
DISCLAIMER
We highly discourage anyone from trying to apply our testings to your own earphones, the risk of damaging or permanently breaking your iems is absolutely probable to happen. With our standardized equalization and amplification tests we push the limits of the earphones to the extreme. If anyway you decide to do so, we cannot be held responsible of the damage done to your equipment. Do it at your own risk.
See PriceAliexpress See PriceAmazon