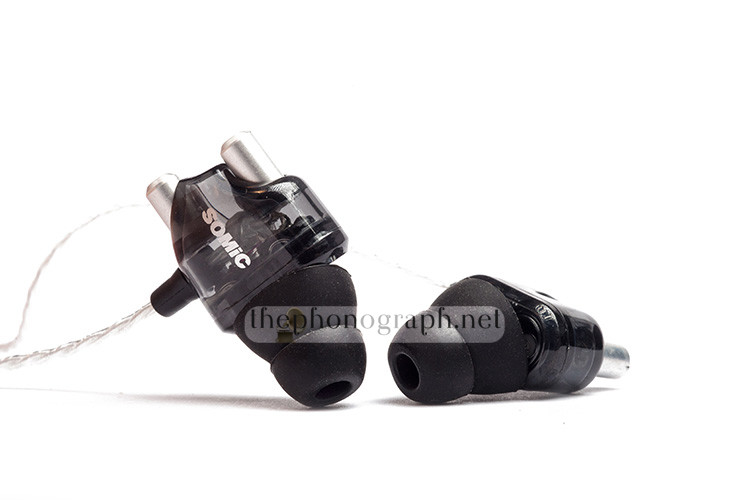 🎧 Somic V4, a premium looking model from Somic that features two microdrivers with a diameter of 6 mm and two N48 neodymium magnets. Somic is a brand that has manufactured a huge amount of earphones and headphones and usually their products have a budget friendly price. The Somic V4 are placed on the upper range of their models. The Somic V4 have a very attractive looking design and style with their special form factor and translucent housings that allow you to see the inner components. On the rear section of the housings there are 2 protruding metal pieces that resemble a car exhaust pipe. The Somic V4 housings are constructed in plastic with a durability that feels it would not suffer from breakage issues. The cables have a silver/white color and have a high resemblance with the type of HiFi silver replaceable cables that can be bought for many high-end HiFi in-ear monitors. This, of course, makes them look much more premium and expensive than they are. The Somic V4 have no inline microphone or button controls and are compatible with any type of device with no compatibility difference between Android and Apple devices. The Somic V4 price is a bit higher than many of their other Somic models but you will be paying for some premium features as the double dynamic driver, strong neodymium magnets, unique design, premium appearance and HiFi looking cable. You can buy the Somic V4 in:

The Somic V4 come inside a large box with a brown-goldish pearled finish that to the eye reads “premium” but once you grab it you feel the cheap construction of the box. After unboxing the Somic V4 you will get 3 pair of deep fit eartips and a cap for the mini stereo plug. Somic usually does not cheap out on the amount and variety of accessories provided but they did this time.

The Somic V4’s bass has little depth and mid-bass has a bit of punch but nothing to write home about. To be honest their bass will probably suffice for low demanding bass genres but still their overall bass is not great. We recently reviewed the MACAW RT-10 which had a controlled bass response but it was greatly achieved. A not too strong and/or not over-emphasized bass does not mean “bad bass” but in the case of the Somic V4 we did not like their bit-punchy/too-shallow bass response that just gave an unbalanced and thin sensation. With their double N48 neodymium magnet we were expecting way better bass coming from them and not this poorly achieved response. Applying an EQ things did not get any better, sub-bass responded with a muted space and mid-bass sound quality was pretty bad. The Somic V4, like the MOXPAD X6, come with double-flange deep fit eartips. As we saw during the review of the MOXPAD X6

, this kind of eartips usually reduce bass response and help to clear up lower mids. The MOXPAD X6 included normal single-flange eartips but the Somic V4 does not, consequently we are not doing a second run test with normal single-flange tips as we did on the MOXPAD Review. Still we couldn’t resist ourselves and for the sake of our curiosity we did a quick run with the eartips of the KZ ZST (a very strong bass in-ear headphone) and the Somic V4 showed some gain in mid-bass response but overall the bass was still below par. During our extreme basshead tests the Somic V4 managed to take up to 35% of a Fiio E12

‘s maximum power while set to high gain and with it’s bass boost ON. The results were a pathetic response with no added depth or punch and distorted sub-bass, they showed one of the worst extreme amplification performance that we have ever tested. By now you can already guess that rumble and impact is something that the Somic V4 did not produce.

have lower mids that are clear with little mid-bass bleed perceived, higher mids sound sparkly and are usually not too harsh unless a strong high peak is reached but consider that depending on the type of music that you listen you might perceive them frequently. People wanting clear lower mids and higher mids will probably like these ones. With an EQ lower and mid vocals get a bit of extra energy but sound boxy; higher mids get very harsh.

Highs of the Somic V4 are bright enough and have a slight level of detail. Strong sibilant highs are not present and piercing highs usually are not perceived unless strong peaks are reached. An EQ adds a very significant amount of brightness and open up substantially, still not much detailed is resolved. Piercing highs remain under control and sibilance starts to appear but not too much.

The level of sound that leaks out of the Somic V4 is lower than most average earphones by a negligible amount. This will allow you to crank the volume up a tiny bit more than an average earphone before it becomes too hearable by nearby people.

The design of the Somic V4 are undoubtedly very original and good looking but it did not translate greatly into the comfort department. The angled nozzles and highly protruding earpieces made them an oddly fitting earphone. Despite all of this, they do not generate pain in the ears.

Basically highs were the only frequencies that responded fairly well but still they could not add detail. Mids and vocals gained some energy on the lower end of the vocals frequencies but sounded boxy and higher mids got very harsh. Bass filled up of muted spaces in the sub-bass region and mid-bass couldn’t add any punch.

The Somic V4 certainly look much more expensive than they are thanks to their unique housings and cable resembling HiFi cables and they were able to provide clear mids but are harsh on the higher end and do not hold up well on the lower end of the audio frequencies with shallow bass depth and overall poor response, also highs despite giving some brightness lacked detail.
To sum it up, the Somic V4 look much more promising on paper and by their appearance than what they can actually deliver; there are vastly better options out there. In fact, more than half of the ones that you will find in our In-Ear Headphones Scores Comparison Page will be better than the Somic V4.
We can recommend the Somic V4 with reservation and only to listeners that are specifically looking for clear mids and do not like or care much about bass or if their music genre preferences involve very low bass requirements. Do not get us wrong, they are not horrible earphones but they have a very narrow gamut of public that could feel happy with them.