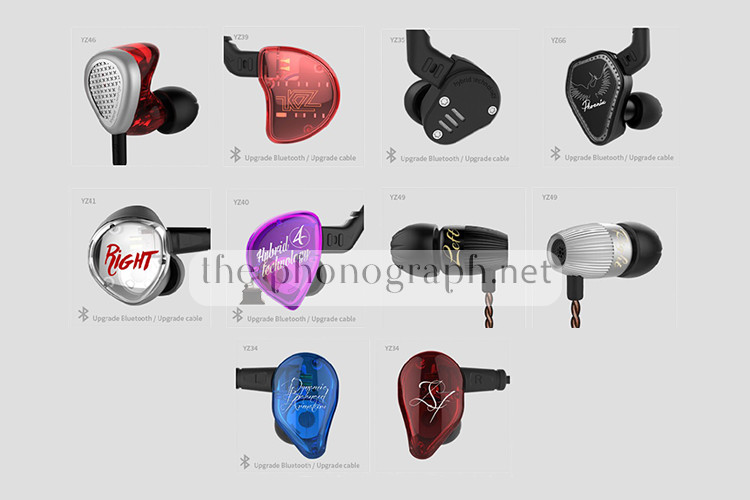 Let’s get into the details of each one:

The KZ YZ34 is a triple hybrid driver earphone with 1 dynamic driver and 2 balanced armatures per earpiece, summing a total of 6 drivers (like the KZ ZSR

). The housings of the KZ YZ34 are made of plastic and you will be able to choose between a translucent blue or translucent red color. The cables are detachable with a straight o.75mm bi-pin connector like the KZ ZS6

UPDATE: This model was finally released as KZ ED16

The KZ YZ35 is also a triple driver earphone with an hybrid configuration of 2 balanced armatures and 1 dynamic driver per side (6 drivers in total) but the KZ YZ35 vs KZ YZ34 have aluminum allow housings instead of plastic. The housings have a grill on the outer plate and visible hexagonal screws similar to the KZ ZS6. The cables are detachable with a 0.75mm bi-pin connector but the plug in angled like the one seen on the KZ ZSR, KZ ZST, KZ ES3 and KZ ED12. The KZ YZ35 can be used with the angled KZ Bluetooth cable and other KZ cables

UPDATE: This model was finally released as KZ ZSA.

The KZ YZ39 is a 5-driver hybrid earphone with 1 dynamic driver and 4 balanced armatures becoming the first in-ear headphone from Knowledge Zenith with 5 drivers. Each earpiece holds inside 5 drivers making a total of 10 drivers. The housings of the KZ YZ39 are made of polycarbonate and they have detachable cables with an angled bi-pin (0.75mm) connector like the KZ ZST, KZ ZSR, KZ ED12 and KZ ES3. The KZ YZ39 can be used with the Knowledge Zenith Bluetooth cable and extra KZ cables.

UPDATE: This model was finally released as KZ ZS10.
Then followed by two other 5-driver models: the KZ BA10

The KZ YZ40 is a dual driver hybrid earphone with 1 balanced armature and 1 dynamic driver per earpiece (total of 4 drivers). Like the KZ YZ39, the KZ YZ40 is made of polycarbonate, also uses an angled 0.75mm bi-pin connector and will be usable with KZ’s Bluetooth cables

and other KZ cables like the KZ silver cable

UPDATE: This model was finally released as KZ ES4.

, KZ YZ39 and KZ YZ40, meaning that it has 1 dynamic driver and 1 balanced armature inside each earpiece. Each housings is built with plastic materials. The cable is detachable with a bi-pin connector (0.75mm) that is straight like the one of the KZ ZS6

and KZ ES3. You can buy the KZ Bluetooth cable and use them with the KZ YZ41 as well as other KZ cables

The KZ YZ49 are aluminum alloy earphones with 2 drivers (1 dynamic driver + 1 balanced armature) in each earpiece. You can choose them in black or silver color. Much like the KZ YZ46, the KZ YZ49 does not have detachable cables and cannot use KZ’s Bluetooth cables. The weight of the KZ YZ49 is 27 grams, with an impedance of 8.5 ohm, a sensitivity of 96 dB and a frequency response of 15-40000 Hz.

UPDATE: This model was finally released as KZ ED15.

As of this date Knowledge Zenith has not released detailed information about the KZ YZ63.

UPDATE: New info revealed about the KZ YZ63 and official images of the product.

The KZ YZ63 are dual driver hybrid earphones with 1 balanced armature + 1 dynamic driver. The construction materials are metal + polycarbonate and, apparently, will have detachable cables which could be replaced with KZ Bluetooth and upgraded cables.

The KZ YZ66 is a triple hybrid driver earphone, like the KZ ZSR, with 2 balanced armatures and 1 dynamic driver in each earpiece. The KZ YZ66 are constructed with ABS and have a detachable cable with an angled bi-pin connector like the KZ ZST, KZ ES3, KZ ED12

and the latest announced KZ YZ40, KZ YZ39 and KZ YZ35. Like all 6 models just mentioned, the KZ YZ66 can be used with KZ’s Bluetooth and “upgraded” cables.

Like with the KZ YZ63, to this date, KZ has just announced the name of this model but has not released any further information about them. Among all models the KZ ZS4 is the only one that follows the naming legacy of the previous models (KZ ZST, KZ ZS3, KZ ZS6, KZ ZS5, KZ ZSR, KZ ZSE, KZ ZS1

UPDATE: This model was released as KZ ZS4.

The latest announcement adds 10 fresh new models to KZ’s catalog which in the last months Knowledge Zenith has already launched a crazy amount of earphones:

RECOMMENDED FOR YOU: KZ Earphones Comparisons