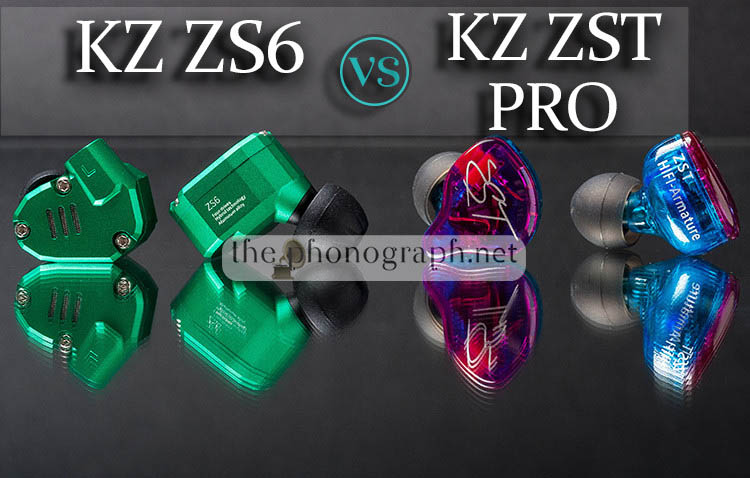 are part of the family of the first hybrid in-ear headphone that KZ had ever built. The KZ ZST PRO / KZ ZST Colorful are made of plastic like the KZ ED12

while the KZ ZS6 are constructed in metal. Further in this article of the KZ ZS6 vs KZ ZST PRO / KZ ZST Colorful you will find a deeper insight of their differences.

Through out this KZ ZS6 vs KZ ZST PRO / KZ ZST Colorful comparison we will provide you with a:

Right now there are some discount available for the KZ ZS6 and the KZ ZS5, you can get the deals by clicking the green button

About the comparison
Our comparisons reviews are done with live analysis and comparison tests run through each headphone back-to-back. The results of the KZ ZS6 vs KZ ZST PRO / KZ ZST Colorful comparison are done with units that we currently own. Our comparison tests or any of our in-depth reviews are 100% produced by the resulting unbiased tests done by ThePhonograph.net team and NOT created with recycled information from the web or “by memory” (term referring to “have heard in the past” or “as far as I can remember”) which would incur in a highly inaccurate perception and therefore incorrect results.

We have already thoroughly reviewed both the KZ ZS6 and the KZ ZST PRO / KZ ZST Colorful and the reviews focused on each earphone’s performance individually but, for example, something that might sound very bassy on an individual model test might seem less strong than the bass from the other model when lively comparing them back-to-back. For this reason, our KZ ZS6 vs KZ ZST PRO / KZ ZST Colorful comparison will provide you with a direct comparison between each model and will concentrate in exposing the difference in performance exclusively between both earphones.

Nonetheless, we highly recommend to read our full review of the KZ ZS6

and the KZ ZST PRO

which will provide you with a deeper insight of their sound quality, performance, capabilities, pros, cons, etc. If you are interested in reading the full in-depth reviews of the KZ ZS6 and the KZ ZST PRO / KZ ZST Colorful, you can read them at: