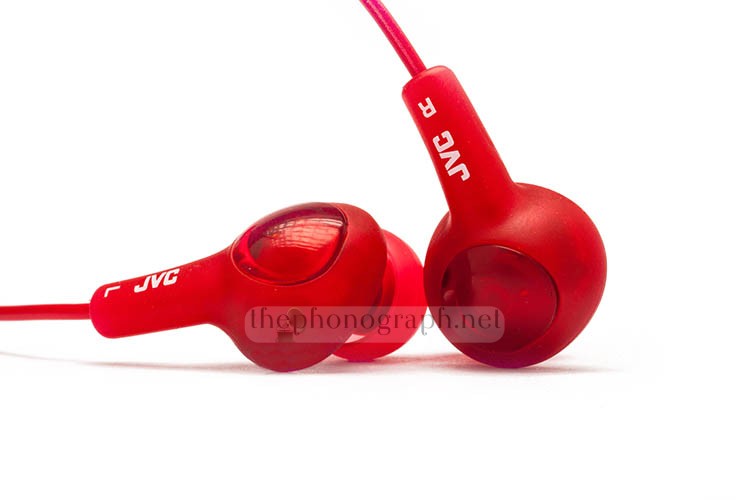 🎧 The JVC Gumy Plus HA-FX5 have been named as one of the best budget earphones of 2017, we are reviewing them to see if they are able to fill such big shoes. Reading the technical specifications of the JVC Gumy Plus they sound extremely promising sharing almost identical specs with the JVC HA-FX102 (which are part of the Xtreme Xplosive line of JVC’s earphones and usually cost much more) also the JVC Gumy Plus have even a larger dynamic driver than the JVC HA-FX1X. The promising and shared specs that we refer to are: a large 11 mm dynamic driver, a strong neodymium magnet and a rated power capacity of 200mW.

Before getting too excited, we have to tell you that we have reviewed earphones that have some of this specs and did not particularly excelled or surprised us too much, like the Panasonic RP-HJE120 ErgoFit, Philips SHE3580, Panasonic ErgoFit RP-TCM125 or the Panasonic ErgoFit Plus RP-HJE190. The JVC Gumy Plus HA-FX5 are made entirely of plastic but they don’t feel as cheap as many other plastic contenders, the cable though not being particularly very tangle-free it feels somewhat robust. Some may find the design a little toyish but we find it pretty attractive, well designed and fun.

Some may find the design a little toyish but we find it pretty attractive, well designed and fun.

Unfortunately the JVC Gumy Plus come packed in a plastic blister, which is annoying and cumbersome to open. Inside besides the earphones there are 2 extra pair of eartips always matching the color of the earphones chosen.

The specs of the JVC Gumy Plus HA-FX5 can sound like they will have a very strong bass response and right out of the box the JVC Gumy Plus are performing as it was expected, they are able to produce very punchy mid-bass with lot of energy and sub-bass offers very good depth too. The quantity and strength of bass coming from the JVC Gumy Plus is capable of fulfilling the needs of bass thirsty listeners without too much struggle. The fun, energetic and bassy JVC Gumy Plus HA-FX5 got enhanced with an EQ gaining mostly a lot more of sub-bass depth while mid-bass remains similar as before but everything gets muddy. Under our standardized extreme bass tests the JVC Gumy Plus handled up to 49% of a Fiio’s E12 amplifier maximum power (set to high gain and bass boost on), the bass response was an exponential increase in sub-bass depth and mid-bass punch resulting in a marginal basshead impact which had fair depth but was distorted. To get an idea of the impact that the JVC Gumy Plus were able to achieve, expect a basshead performance below the KZ ATE but way above the Panasonic RP-HJE120 ErgoFit.

Mids of the JVC Gumy Plus are warm and laid back. Lower mids and lower vocals get overshadowed by mid-bass, higher mids are not as recessed and can get marginally harsh at times. With an EQ lower mids and lower toned male vocals clear up noticeably but harshness get substantially stronger too.

The highs of the JVC Gumy Plus lack brightness but are able to reproduce some detail. At times of very strong high notes the JVC can get piercing but they are not sibilant. After equalizing, brightness gets significantly enhanced and some detail is gained but not too much, sibilant highs become very present but the already somewhat piercing highs remain as before applying an EQ.

The sound leakage performance of the JVC Gumy Plus is excellent, very attenuated levels of sound may be perceived and in mediumly noisy situations nobody will hear what you are listening to.

Probably the slightly bigger housings and deeper fit that the JVC Gumy Plus are able to achieve are helping with the noticeably above average capacity that they have to isolate from environmental sounds without needing to apply too high volume levels.

We found the JVC Gumy Plus extremely comfortable to wear and pain free. The lightweight plastic housings do not generate fatigue or extra weight to the ears. The JVC have a great deep and tight fit that ensures no risks of falling easily from the ears but they do not fit too tight as to produce discomfort or pain. As well, when positioned deep enough they sit almost flush with your ears so you can rest your head on your hands without pushing them too much into the ear canals.

The JVC’s response to diverse custom EQs applied was fairly good from the point of view of what was gained but it lost too many points here because it also introduced undesired muddiness with bass equalization, harshness with mids and sibilance with highs equalization.

The JVC Gumy Plus offer a nice design, great comfort and strong bass but fall a bit short on other aspects. We consider that saying that the JVC Gumy Plus are one of the best budget earphones of 2017 is undoubtedly wrong and they are extremely far from being the best or even one of the best. If you have been reading our reviews by now you must realized that there are a lot of greatly better earphones at similar prices. Nonetheless, because they are very cheap, do not perform terribly bad and if you don’t have a high expectations of their sound quality we could recommend them as a daily earphone that you wouldn’t care too much if they get lost or broken.