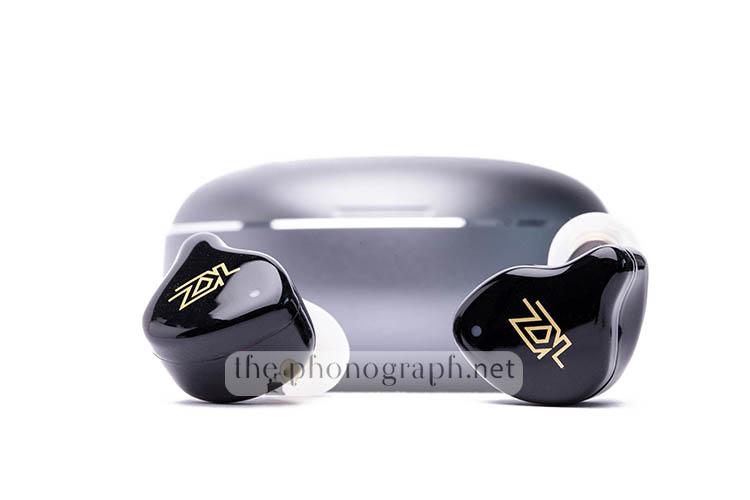 🎧 We are reviewing the KZ T1 TWS, the first ever true wireless earphone from KZ.

Before the just released KZ ZSX (6-driver hybrid earphone), the KZ T1 was the newest earphone from the brand.

The housings of the KZ T1 TWS are made of plastic (quality level inline with many other of KZ earphones made of plastic), which makes them fairly light weighted, yet without feeling flimsy. In addition to the main build, the nozzles are golden colored and made of metal.

The case of the KZ T1 TWS has a circular shape and is made of metal with a top opening “door” that ensures that you do not loose the earpieces while carrying around the whole unit.

The brand has opted for a simpler color design than all their latest models, with an all-black, non-translucent finish and the brand’s logo on the back section.

The KZ T1 TWS is an earphone released as a “beta” product by the brand that was immediately discontinued and taken off the “shelves” of all trusty resellers.

Some of the advanced features of the KZ T1 TWS include:

The back section of each earpiece on the KZ T1 TWS is touch sensitive, allowing full control of the unit and most listening commands, such as:

In addition to the case lights, the KZ T1 TWS has a single light indicator placed on each earpiece’s rear plate.

Charging: The case of the T1 gets charged by plugging it to a wall charger through the micro USB connector – the brand explicitly recommends not using chargers that provide more than 1.5A.

The earpieces are charged by placing them in the dedicated slot on the charging case/battery pack; this allows them to be charged either while plugging the case to a wall charger and/or on-the-go with the internal battery hold inside the case itself.

A full charge should provide 3 hours of music playback, while the case can add up 7 to 8 extra full charges on-the-go.

To fully charge the earpieces it is needed 1.5 hours while the complete charge the case takes up to 4 hours.

The KZ T1 TWS unboxing results in 3 pair of eartips, a micro USB charging cable and the case/battery pack.

The unit comes inside a small rectangular box with a mainly black design.

The KZ T1 TWS has a particularly deep sub-bass with very punchy mid-bass too.

Expect a deeper sub-bass than most true wireless earphones and even than many wired earphones too.

As with most bass-intense earphones, they can risk to become loose and out of control at times, which might interfere with the rest of the sound signature. Yet, in general and on most tracks, their lower frequencies achieve an intense but non-excessively boomy response.

As a point of reference, their lower end response is more or less inline with many KZ wired earphones.

Applying an EQ, their sub and mid-bass can be pushed to an even more powerful response but expect a bass-only sound.

The KZ T1 exhibit very warm mids with their potent bass still being felt over their lower midrange and male vocals.

Nonetheless, male vocals do not tend to sound distant but neither too aggressive. Lower mids are able to remain warm but sufficiently clear despite the, aforementioned, bleeding of their upper bass – their congestion will vary according to the amount of bass on each track.

On the other hand, higher mids are much more emphasized than their low mids, presenting a crisp sound and tending to show harsh peaks – female vocals might present shouty peaks.

A tip: keeping volume settings below moderate-high will make them show milder harshness.

With an EQ, lower mids can be cleaner up a bit while their harsh peaks will not be easy to sedate.

Highs of the KZ T1 TWS tend to resolve a good amount of detail but some dips in their response can add a “stacked up” sound personality on some tracks.

Despite this, the T1 remain acceptably fatiguing with some sibilance and piercing peaks that might not be as frequent nor as intense as other forward sounding earphones.

Using an EQ, a remarkable improvement of detail can be obtained, as well as a generally brighter and more open sound – do expect more intense and frequent fatiguing peaks.

7.75/10
Important NOTE on the KZ T1 TWS: A couple of days after finishing our soundtests, the left earpiece of the KZ T1 did not output any sound despite turning on. Earpieces turned on and paired correctly (confirmed by the light status) but no matter what we tried the left earpiece did never output sound – this could be an isolated problem with our unit but could also be part of the reasons why this was launched as a “beta” product and immediately discontinued.
Still, our unit was repaired by our technicians..

The sound leaking out of the KZ T1 TWS is extremely silent with nearly no leakage at any volume setting and becoming just barely noticeable when cranking up the volume to the maximum.

This leakage characteristic makes it a very good companion to users which might want them to be used in libraries.

The sound isolation of the KZ T1 TWS is somewhat stronger than many average earphones. Nonetheless, absolute isolation should not be expected with this earphone unless you start to dial the volume setting above moderate-high.

The KZ T1 TWS has inherited a housing’s form factor somewhat similar to many classic and modern wired KZ earphones, which makes them a very comfortable earphone to wear.

Some of the models from KZ that have this similar kind of earpiece’s shape are the:

In addition to the fairly small size and rounded edges, the KZ T1 TWS is a very light weighted earphone with only 5 grams per earpiece.

In spite of this, the KZ T1 TWS is still a substantially “fatter” earphone than all the above mentioned.

The response to EQ of the T1 showed efficient results boosting bass but EQs aimed for mids or highs exhibited intenser fatiguing and harsh peaks.

Being the KZ T1, their first "test" product to enter the true wireless market, some rough edges were exhibited but it also presented many worthy features and promising performance that could be seen re-polished on future models from KZ.

The KZ T1 will be an excellent true wireless earphone for listeners who enjoy the sound signature of many modern KZ wired earphones - giving KZ fans a TWS option with a sound tuning logical with the brand's style.

Buyers should be aware that as this was a "beta" product that was immediately discontinued and removed from "shelves" there could be some issues, such as what we experienced briefly after finished the soundtests - yet our team was able to repair the unit and there are also many happy owner to date that did not had any issues so far.

How many drivers does the KZ T1 TWS have?

The KZ T1 TWS is a dual driver headphone. Which means that the KZ T1 TWS has 2 drivers per side.

What type of headphone is the KZ T1 TWS?

The KZ T1 TWS is an in-ear headphone.

The KZ T1 TWS is an open, semi-open or closed back headphone?

The KZ T1 TWS is a closed back headphone.

Does the KZ T1 TWS have a microphone?

The KZ T1 TWS have a microphone and a remote.

The colors available for the KZ T1 TWS are: black

The KZ T1 TWS is a Bluetooth wireless headphone.

Is the KZ T1 TWS compatible with Apple devices?

The KZ T1 TWS is fully compatible with Apple devices.

Is the KZ T1 TWS compatible with Android devices?

The KZ T1 TWS is fully compatible with Android devices.

Other products from the brand reviewed by ThePhonograph
Other earphones and headphones with detachable cables:
Other Bluetooth headphones:
Photos 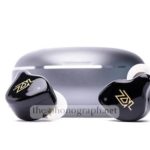